The first trip we had to cancel in March 2020 was our spring break camping trip to Pinnacles National Park. We had another reservation and cancellation later that year, and I think even one more round of reserving and cancelling in 2021. So when we finally loaded up the camper for Spring Break 2022 in Pinnacles National Park, it felt like we were really accomplishing something on our bucket list.

Pinnacles is an easy reach for us, just outside the South Bay Area. There are two entrances to the park, the East Entrance and the West Entrance, and there’s no road that travels from one side to the other through the park. We had reservations for four days in the National Park Campground, which is on the east side of the park. In April, weather was colder than we expected. A wind picked up and we actually spent more time in our Alto than we normally would, just to stay warm. The hillsides and the trees were all green, which is a brief but small window in California.

It was also the height of allergy season, and every member of the family was working through seasonal allergies. I woke up the morning we were supposed to leave to a face swollen and painful. Noah and Nathan were sneezy. Miles was sniffly. This meant we were much slower than we might normally be in a national park. So we didn’t hit the trail until late afternoon on our first day in the park.

We’d heard that parking was a big challenge at the trailheads to the Pinnacles caves. The campground is situated right along the road to Bear Gulch Cave so we had a front row seat when the park rangers closed the road to cars wanting to drive up and hike the cave trail. You can hike from the campground to the caves, but it adds about two miles to each direction of your hike. Lots of people passed our campsite, heading along the Bench Trail to the caves. Around three o’clock, through, the park ranger packed up, and we started our hiking day.

We drove all the way to the start of the Moses Spring Trail. The parking spots were full, though, to be fair, there were only about nine of them. However, just up the road, back towards the visitors center, there were lots of spots. We parked about two tenths of a mile from the start of the trail, and hiked in.

We looped the Moses Spring Trail, through the Bear Gulch Caves, to the reservoir, to the Rim Trail and back to the Moses Spring Trail. Everyone in the family enjoyed this hike. Most of the uphill sections were in the Bear Gulch Caves, and mostly in the form of stairs, but because we were moving through caves, no one seemed to mind much. We had packed our headlamps for the caves, and really enjoyed the adventure of ducking under rocks and hearing the water cascading through the darkness. In the late afternoon, the caves had a few folks in them, but it definitely wasn’t crowded. There were plenty of folks at the reservoir, enjoying the blue skies and water views, but we had the Rim Trail almost to ourselves.

The next day, we were slow again. I thought we might drive back to our parking spot from the day before and hike the Old Pinnacles Trail towards the Balconies Caves. Even though that would have been an eight mile trip, I hadn’t ruled it out entirely. In the end, we hiked along the Bench Trail towards Peak’s View. We wanted to be sure to take a photo in front of the park sign which was, strangely, in the middle of the park. This walk was an easy, flat, pretty 2.6 out and back trip, from our campground to the park sign and back.

The campground was really pretty, which also played a part in our willingness to hang out there rather than hike the park. We were parked under a huge oak tree, with woodpeckers in the branches and quail running around underneath. The cats were delighted with their window views. We saw plenty of turkey vultures flying overhead, but never once caught sight of a condor. We will have to head back and try again. Maybe next spring break? 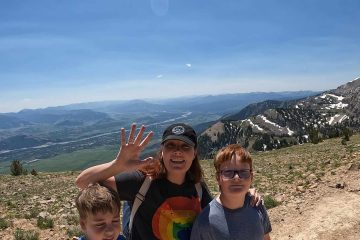 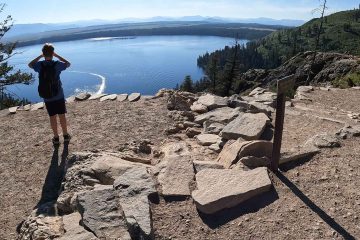 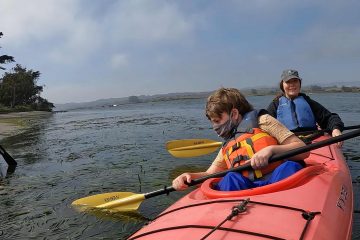 Last summer, while we were camping at Lemolo Lake, the boys and I rented a pedal boat for a two hour adventure. The pedaling went much better than I expected, and when I was looking Read more…